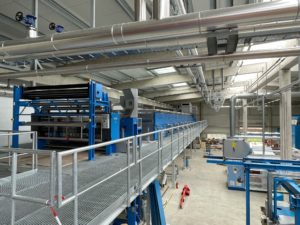 Bramsche Right on time with the start of production after the company holiday, the relocation work of the so-called dry finishing department to a newly built production hall was also completed. Machines weighing several tonnes were thus moved within the company, on the one hand to optimise processes with shorter distances and on the other hand to create space to integrate external production areas in Bramsche in the future.

“The relocation of the machines was carried out with the company’s own craftsmen – supported by external specialists – according to a very tightly organised schedule, which was determined by the summer shutdown”, says project manager Rolf Wermeyer.

Meticulous planning was therefore a basic prerequisite for the success of the project, otherwise the start of production would have been in question – which could have had fatal consequences for the readiness to deliver. However, since everyone involved worked with a high degree of professionalism, the project was completed without any significant delays.

The next milestone will be the commissioning of a new stenter frame that not only produces more efficiently and with higher output, but also does so in an environmentally friendly way. A measure that will bring the Bramsche-based company a considerable step closer to its goal of becoming one of the most modern and competent finishing companies in the field of down-proof fabric production in Europe.